9:24 AM
Robinson3d
2
Alot of Facebook users were still unaware of the fact that Facebook messenger can be used without necessarily owning a Facebook account. Now the possibility to this was still in doubt but not until someone asked Facebook Founder "Mark Zuckerberg  of the possibility and was able to get a  reply asap.

For a site like Facebook; housing up to a billion plus users and millions of monthly visitors, daily interaction and connection with friends and family should not be compromised especially in this current dispensation of social media. A particular question Mark answered was from a user who had wanted to know the possibility of using the Facebook Messenger application without actually synchronizing it or owning a Facebook account to which Mark cleared the air that it was actually possible. 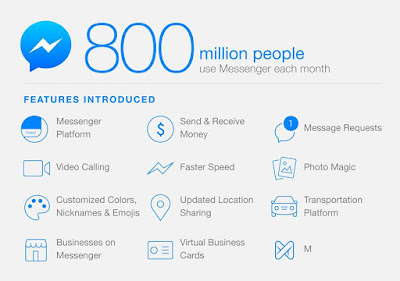 In a recent Post from Mark, which he applauded the effort of his team and the significant increase Facebook messenger has recorded over the past years, Mark revealed they had recorded over eight hundred million users monthly (800,000,000).Below is a text culled from his page:

MUST READ: How To Create/Register An Instagram Account On PC - No Smartphone Required
"I’m constantly on Messenger. It’s an important part of how I run Facebook and keep in touch with my friends and family. I use Messenger to quickly get information from engineers to make decisions. I also message a lot with Priscilla every day and probably use way too many stickers. The cactus, Beast and Star Wars stickers are probably my favorites.
This is going to be a big year for Messenger. We’re working hard to give you more ways to communicate, and I’m proud that Messenger is helping to connect so many people around the world."

A particular question Mark was forced to answer was the possibility of Non-facebook users to make full use of the application which he gave a shocking reply to.

Below is the screenshot of the question asked and the reply gotten:

"It is more dependable and a little faster than texting.It should be made available somehow, to those who don't want facebook accounts. There are those people."